The Woman’s Franchise League of Indiana was divided into 13 districts[1].

Several counties were grouped within each district with a District Chairman at the head.

Peru was part of the Eleventh District, which included

Each county had a growing number of branches, who had to organize an annual county convention.

Mrs. E A Gould, of Peru took over as 11th District Chair in April 1917.  She succeeded Mrs Eva Rohbock of Wabash.  In 1917, Mrs. Isaac Beitman (Wabash), Margaret Magee (Logansport) and Mrs. Charles Butler (Huntington) made up her team.  Mrs. Rohbock was a tough act to follow but Fannie proved to be up to the task. 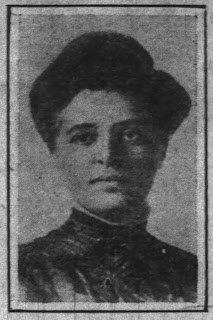 Mrs. E A Gould was born Frances Emma Bearss, on 26 June 1874[2] in Rochester, IN, the daughter of Albert Cole Bearss and Emily Madeline Vinton.  She married Emmett Allen Gould on 8 Nov 1893.


The 1917-1918 Woman’s Franchise League of Indiana directory stresses the importance to not discount the presence of the women of color.  On page 21, we find the following:

“We are overlooking a valuable corps of workers if we do not enlist the colored women.  This was brought to the attention of the Conference by the president of the colored woman’s league at Marion, Mrs. Stella Weaver Nukes.  In an excellent talk, she urged that all cities where the colored population was large enough to warrant it, we go to their minister and ask him who are the leaders.  In Most cases he will be glad to assist us.”[3]

It is interesting that within our district there were 2 African American branches:

- one in Wabash: The Wabash Colored League was organized in August 1917 and

- one in Marion: The Afro-American League was organized in June 1917

In Peru we were able to find the names of 2 African American women: Cassie Hill and Mattie Moss.  Cassie Hill had moved away by the 1920 census but Mattie Moss was still here.  Very little is known about them however.

Mattie Moss was married to Frank Moss, Ora Moss’ brother.  The Mosses were a family of barbers and hairdressers with ties in Indianapolis and Logansport.  The grandfather, Alexander Moss[4], arrived in Miami County before 1850, a free man.  He became a wealthy and well respected member of the community.

On April 24th, 1918, Aileen Crockett stopped by Mattie’s house on East 3rd Street in Peru to sign her up for war work thru the Council of Defense registration program. This is how we learn that in 1917, after the Maston-McKinley Act gave partial suffrage to the women of Indiana, Mattie registered to vote.

We will recall how Aaron Berger, the overzealous young County clerk, had stopped all women registrations in June 1917[5], after Indianapolis Judge Thornton ruled against women voting.  So we know Mattie had already registered in anticipation of casting her ballot for delegates to the September 1917 Constitutional Convention.  This would be declared illegal and the suffrage law would be rescinded instead. 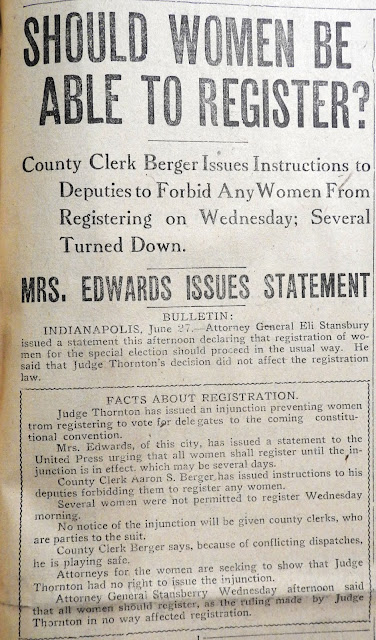 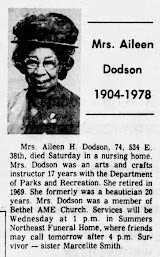 While we do not have a registration card for Aileen Crockett[6], the 1920 census tells us she too was African American, actively engaged in recruiting women to the cause.  She surely would have filled a card herself and since in 1918, Marie S Edwards had challenged the women of Indiana to combine tasks so as to exert less energy but reap twice the rewards, it is easy to jump to the possibility that Aileen was working with the league too.

It would be nice to compare the data with other cities but we have no knowledge of other cities having the tools we have been able to use.

Mamie Russell was a hairdresser born in Canada on Dec 2, 1865, the daughter of Hezekiah Harper and Elizabeth Preston.  She married Walter Russell in Wabash on May 2, 1889.  She died pm March 30, 1951 in Wabash, IN.  Mamie was a freemason and belonged to the Order of the Eastern Star (colored lodge). In 1922 she was a grand matron.[7]  So much more to research here. 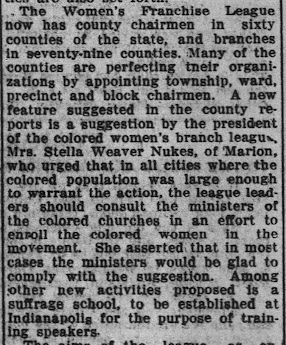 In Marion, it was Stella Weaver Nukes who presided over the local branch. She was helped by two Vice Presidents: Lissette Welch and Elizabeth Weaver. Her secretary was Cora Julius Spire and she lists a reporter, Susie Burden. Stella W Nukes is the very one quoted in the league directory and is mentioned several places.
On January 16, 1918, when the Republic published the reports of the Leagues, Stella Nukes is quoted to have urged “that in all cities where the colored population was large enough to warrant the action, the league leaders consult the ministers of the colored churches in an effort to enroll the colored women in the movement.  She asserted that in most cases the ministers would be glad comply with the suggestion among other new activities proposed a suffrage school, to be established at Indianapolis for the purpose of training speakers.”[8]

Another article published in March 1918 mentions Stella speaking at a California Convention of the WCTU[9] but we need to go back to August 24, 1917 to read in the Evansville Press where the directory quote was pulled from.

In August 1917, the Woman's Franchise League held another big statewide convention, again attended by Carrie Chapman Catt.  During this convention, each county league president was asked to present a report of their work.  After describing the women attending the conference as a "quiet, capable, sweet, intelligent, democratic, human crowd that somehow never find their way into print as regular people like the rest of us, but usually as a vague, ambiguous mob shouting for their 'rights' and trying to down the men', Marie Barnett, Evansville Press correspondent, continues:

"The suffragist at the Indianapolis convention is a mother with soft gray hair, or a grandmother, perhaps; or she is a young girl with a flash in her eye and the natural rose tint of youth yet on her cheeks; a handsome leader of her social crowd at home; a scrub woman who spent the morning mopping the floor of the hotel, and who crept into the back of the big assembly room in the afternoon to see if 'votes for women couldn't do some good an' maybe make a machine for the cleanin' up of things so that a woman would have to go down on her knees to scrub."

and then she drops the 'bombshell'...

"And there is also a suffraget there who represents the negro race.  There was a stir at the conference when ..."

Picture this... in the Claypool Hotel, walking to the pulpit, filled with all these women in their best attire...

"...  Mrs. Stella Weaver Nukes of Marion appeared as a representative of the Afro-American Franchise league, which is affiliated with the state and national organization. The colored woman is enthusiastic over the work her race is doing.  Mrs. Nukes is 29 years old and has six children."

Stella May Weaver Nukes[10] was born on 28 January 1888 in Indiana to Franklin Weaver and Catharine Laiuie Jones.  She died in Marion, IN on 28 Aug 1937.  She married Thomas Nukes on Jun 20th, 1906 in Grant County.  In 1920 they still reside in Grant County.  Her husband is listed as a "chiropedist" in a barbershop.  On the 1930 census he is said to be a podiatrist - which matches his grandson Hubert Nukes' description in correspondence he exchanged with Kyra Hicks for her book.  He says that his grandfather was a 'foot doctor' and gave massages[10a].  The census reports that Stella is a newspaper writer! 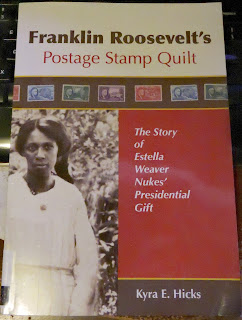 er book, Franklin Roosevelt's Postage Stamp Quilt, Kyra E Hicks, recounts the story of a quilt Stella Nukes designed and created with  the help of other women of the WPA[10b]'s Sewing Class, at the Marion civic hall, under the supervision of Mrs. Ferol McMillan. [11]

The quilt is nowhere to be found today.

Stella was also involved with the WCTU.

Her sister Debra Weaver who was living with them. She was married to Hershel Wood Dodson, and another sister married a M L Wood with whom she moved to South Bend. A third sister, Mrs. Otto Jones took trips with Stella to South Bend to visit the family.[12]

There is no connection with Aileen Crockett, war card registrar, who married Edgar C Dodson. Although Stella tragically lost a daughter in Peru in 1923.

We have but scratched the surface in this matter.

We call out to the descendants of these women to help us reconstruct the story. 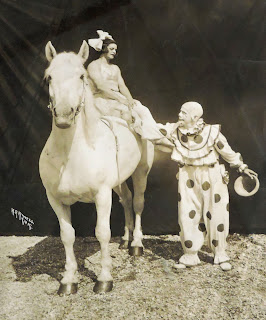 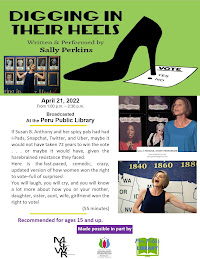 The Unveiling of "The Girl with her Bike" 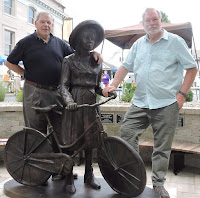